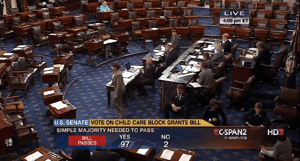 In an effort to significantly improve the quality of child care across the nation and to prove that it is possible for the Senate to work in regular order, in a bipartisan manner.  By a vote of 96-2, the Senate approved S.1086, the Child Care and Development Block Grant Act of 2014, turning the focus over to the House of Representatives for action.

The Senators voting in favor of passage for the bill included 53 Democrats, 42 Republicans, and 2 Independents.  Only Senator Mike Lee (R-UT) and Senator Tom Coburn (R-OK) voted against the measure, while Senator Jerry Moran (R-KS) and Senator Jim Inhofe (R-OK) did not vote on the bill.

Throughout the second day of Senator floor consideration for S.1086, the Senate adopted 10 amendments covering a wide-range of topics related to the bill.  Nine of the amendments were adopted by voice vote, while only one of the amendments was adopted by a roll call vote, Senator Coburn’s measure to help ensure that child care assistance is not being supplied to those with an income greater than $1 million annually.

While passage out of the Senate was an important step forward to improving the quality of child care, the process is far from finished as the House of Representatives will be pressured to take action.  The good news is that the prospects coming out of the House Education and the Workforce Committee have seemingly increased the odds that CCDBG Reauthorization will be looked at in this upcoming year.

Today, immediately following the passage of S.1086 out of the Senate, House Education and the Workforce Committee Chairman Rep. John Kline (R-MN) released this statement:

“Senate passage of legislation to reauthorize the Child Care and Development Block Grant is a step forward in the shared goal of strengthening the nation’s existing network of early childhood services. The bill includes several commonsense provisions that will help empower parents and enhance coordination between CCDBG and other federal early care programs, such as Head Start. The committee will convene a hearing on March 25, 2014 to examine House priorities for CCDBG, and I look forward to a productive discussion as we work to find common ground and complete the reauthorization of this important program.”

This is a huge win for working families in this country.  This bill contains many common-sense measures for helping protect children in child care, such as requiring providers to undergo comprehensive background checks, ensuring annual inspections are conducted and requiring childcare providers receive training on CPR, first aid, and safe sleep practices.

We are one step closer to ensuring children are safe and receiving quality early learning experiences while in child care. The research is clear, children's early years are proven to be the most important time to create strong learners. This bill sets the standard families expect for their children.

Please join us to thank the Senate for standing up for children and working families by voting yes to reauthorize CCDBG.