Earlier today, the Senate confirmed President Trump's nominee for Secretary of Education, Betsy DeVos, on a 51-50 vote with Vice-President Pence casting the deciding vote. This is the first time a sitting Vice-President has had to vote to confirm a cabinet nominee.

Last month, Betsy DeVos had a very contentious nomination hearing with the Senate Health, Education, Labor, and Pensions Committee which resulted in all Democrats, as well as Independent Senators Bernie Sanders (VT) and Angus King (ME), opposing her on the Senate floor. Republican Senators Lisa Murkowski (AK) and Susan Collins (ME) also joined the Democrats in opposing Mrs. DeVos.

DeVos, who is a prominent philanthropist and former Chair of the Michigan Republican Party, is a very strong supporter of school vouchers and had served as Chairwoman for the Alliance for School Choice and the American Federation for Children. She also invested in, and was a strong advocate for, the Detroit charter school system, which has received plenty of criticism and praise from various educational organizations.

With regards to child care, Mrs. DeVos does not have any notable experience. However, she will now take the lead in recommending to President Trump nominations for the Undersecretary and Director positions at the Department of Education, including the Director of the Office of Early Education, which is tasked with administering the Early Head Start-Child Care Partnership program alongside the Department of Health and Human Services. 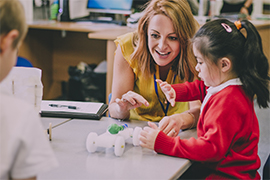